I’ve been really wanting to read a middle school mystery book when I came across The Great Shelby Holmes in the new book section of my middle school’s library. I thought: This is going to be really good or it’s going to really bad.

Well, it was a really good book. Let’s break down the book a little.

Holmes, Watson, Lestrade, and Mrs. Hudson are all a part of this book. John Watson moves to Harlam after his mother gets out of the army. Watson’s mom is an army doctor who has an injured leg, while John Watson is the one who writes in his journal, reliving the experiences of his tim 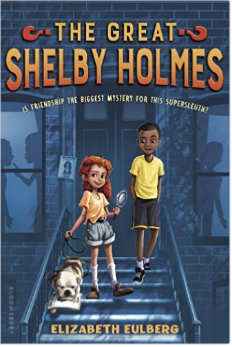 e with Holmes. Watson is a rising 6th grader and so is Holmes, but Holmes is only nine years old.

Obviously, Shelby Holmes is really intelligent, and she has many of the same characteristics of Sherlock Holmes that we see in shows/movies today. She is really sharp and able to pick up on clues that everyone else has missed. She can also can come off as really rude and doesn’t have any friends before she meets Watson. But can Holmes actually have a friend?

Here’s the publisher’s description about the book:

Sherlock Holmes gets a fun, sweet twist with two irresistible young heroes and black & white illustrations throughout, in this middle grade debut from internationally bestselling YA author Elizabeth Eulberg.

Shelby Holmes is not your average sixth grader. She’s nine years old, barely four feet tall, and the best detective her Harlem neighborhood has ever seen―always using logic and a bit of pluck (which yes, some might call “bossiness”) to solve the toughest crimes.

When eleven-year-old John Watson moves downstairs, Shelby finds something that’s eluded her up till now: a friend. The easy-going John isn’t sure of what to make of Shelby, but he soon finds himself her most-trusted (read: only) partner in a dog-napping case that’ll take both their talents to crack.

This is the first book in what I assume will be a series, and the book does a great job introducing the characters of Shelby Holmes and John Watson. As a sixth grade teacher, I see a lot of similarities to students I teach in John Watson.

He’s nervous about making new friends at his new school, he really wants to make friends, and at one point didn’t like Shelby but kept hanging out with her because he wanted a new friend. He just really wants to fit in. I think a lot of middle schoolers will be able to relate to John.

Holmes must solve a dog napping of a very wealthy classmate’s dog. While that doesn’t seem like a great mystery plot, Eulberg’s pacing and plot keep you on your toes until the end, always guessing who was actually behind the missing dog. A good writer can make anything amazing, and Eulberg succeeds in making this book flow.

I highly recommend this book to any readers who like a good mystery. It’s also a great way to introduce readers to Sherlock Holmes, and I will totally be picking up the sequel in this book series if one comes. On a related note, the newest season of Sherlock starts on New Years Day!

Have you read this book or any other books Eulberg has written? Let me know in the comments!

Like A to Z Book Reviews on Facebook to stay up to date on book reviews and news.